New from The Demand Badger Octet:
No Opera
(Behind the tracks) 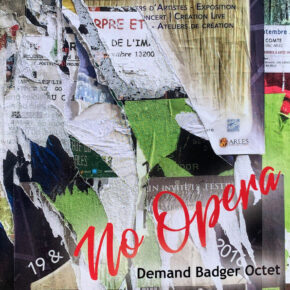 No Opera is a recording that took over three years to complete. Fairly early on, two completed tracks were jettisoned and not included in the CD because I had fallen out of love. Scheduling the recording sessions of the very popular guest keyboardist, Dana Spence, also contributed to the timeline. Some of the tracks were composed and recorded quickly while others took months and months. As mentioned in the liner notes, the title is apt as it is the first Demand Badger Octet CD to be purely instrumental.

My composing approach on all Demand Badger Octet recordings consists more than anything of recording, endless re-recording and layering which is basically a non-random collage process. I rarely notate other than writing out the chord sequence but instead use a DAW digital recorder as the notation; recording is the writing. The process can begin with recording a drum track which typically goes quickly and then layering parts or conversely begins with a defined keyboard part and then adding the drums. For the drums I employ a click track about half the time, usually in lower volume passages. I can tell you without fail that creating and playing the bass lines are always the most fun of the entire process. I do not use any auto-correct or optimization – for better or worse – and I am old school enough not to mind some slight variations in tempo during a piece as sometimes it makes it breathe better and reduces the sterility. On the CD there are two very short interlude sections where I use a sequenced “loop” but otherwise it is all real time. Here are some brief notes on each track:

My favorite element of part one is the strings playing above the straight-ahead 4/4, I always loved strings in pieces like the Theme from Route 66 by Nelson Riddle or even some disco tunes with strings. The second part is in 6/8 and after the intro theme I borrowed something that I learned from reading about  biblical scholarship – so please bear with me on this; when comparing the New Testament Gospels of Luke and Matthew, scholars saw some sections common to both that did not appear in Mark, the major source for both. Therefore, German exegetes had to assume that both gospels were informed by a missing, yet undiscovered text, a source that they called Q – short for Quelle, which is German for source.

I loved the idea of two narratives – in this case musical narratives – being informed by something that is not present. So using this concept my idea for Dana’s dual violin solos was that we would create a synthesizer theme, then have the first violin play off that theme, then do it again with a second violin then remove the “Q” synth theme for most of the piece. This created unified soloing for the two violins as they moved and danced with each other over the rhythm, both playing off a melody line that would soon disappear. I wrote the coda to be sterile and cool after the energy and density of the 6/8 section, played over a simple conga pattern.

This was the first piece completed for the CD.  Drums were recorded first then the other instruments were all layered. I knew how long I wanted the seven sections to be which was the only guide to the drum track. The syncopated drum part of section two is a favorite of mine and very tricky to play. I also wanted to hear a fast tempo, tight bass and drum rhythm section supporting billowing and atmospheric synth chords and swells, not really developing which you hear on section four. This might be obvious but the entire piece is really centered around tension and release and by the time you get to section six it’s almost joyful and dare I say it, conventional. I have been often asked why many Demand Badger pieces have so many different sections, why not just start a new tune? The simple answer is that this compositional approach is in my DNA through the huge impact that Soft Machine had on what I wanted to hear and play, passages flowing into different passages with some having commonality and some not.

This short tune to me is pure emotion, reflecting total sadness and loss as it honors a very good friend who unnecessarily left the planet in 2016. The title refers to something she often did when leaving a party or even a plane which was to simply disappear and not say good-bye. For some reason she got a big kick out of that. Ultimately, tragically she finally did that to perfection.

Back in the day when my old band, Merz, was rehearsing on my parents’ third floor, on the wall there was this very old school sign board of back felt and these yellow alpha characters that would slide in and out. I have no idea who liberated it from some poor business’ waiting room but there it was. So, we would put in different phrases including the non-translatable “Two Tafoms Neigh” being one of them, courtesy of Chris Bradford. It was just fun to say. The tune itself is fairly straight-ahead with the exception that most pieces start with themes and then move to the soloing sections. Here I reversed it and purposefully began with two violin solos over the chord cycle followed by Dana’s very aggressive (and swinging) long fuzz keyboard solo and then moved to the theme section which is played over a somewhat militaristic Magma-esque drum pattern.

Still in the Imagining Phase

I love the title in part because of how long I debated whether there should be a comma after the word “Still.” A comma changes the meaning completely. But ultimately, I decided on no comma, meaning I was still working on imagining the damn piece as it took forever to get it written and recorded. Basically, it has two very different sections with an ethereal bridge separating the second section into two parts. The first section is all quick repeating melodic patterns and despite the lack of drums it is fairly intense, percussive and hopefully pleasantly insistent. The second section is intended to be hyper relaxed, even hypnotic, and other than the string section’s long cycle there is no pronounced melody until almost the end of part one when the cello melody arrives. The melody is echoed in the second half of section two which now features a very minimal percussion part. The cello and flute melodies flow into the final solo, a long elegant acoustic piano solo by Dana which breathes in and out for a full four minutes. I hear the full second section as dreamy and lush, and for me the perfect background music for imagining anything. But, of course, I would say that.

The cover of No Opera

The cover is a photo I took in Arles, France in 2016 of a poster board. My wife, Valerie, and I just stumbled across it. The minute I looked at it I knew it would be a cover for a Demand Badger CD. It perfectly reflects the beauty of collage, in this case the beauty is a product of randomness (which is also an excellent compositional tool) as it is literally is just a board where poster after poster had been placed and then papered over with a new one and the process repeats. As a standalone image I find it intriguing but moreover it is the perfect visual metaphor for how I compose and record music for Demand Badger Octet.

Back to the Discography